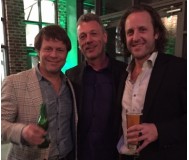 DO ONE THING REALLY, REALLY WELL!

I was at the Steam Whistle Brewing AGM last night down at the Roundhouse in Toronto. Cam Heaps and Greg Taylor, co-founders, hosted once again in their casual and irreverent style. It’s always a fun event – and that doesn’t get said about many Annual General Meetings.

As a founding investor and shareholder, this is classic example of a great start up – Private Equity –investment.  It is exciting yet satisfying to see how “three fired guys” started a small Canadian company with a vision, and then with hard work and passion becomes as successful as Steam Whistle Brewing.

Cam Heaps Co-Founder of Steam Whistle quipped that “…passion is one of the main ingredients in their product, our people are incredible.” That might sound somewhat trite, but being there, looking around, you see and feel it all around you.  They have been voted One of Canada’s Best Managed Companies, for the 7th year in a row. They are a young, vibrant, environmentally responsible company. From the remote trivia category – according to an independent audit, they have now achieved 98% “waste diversion” (that is, “recycling” to us non- Millenials).

These guys are obviously still having fun after 15 years.  The smiles on their faces tell the story. Throughout the meeting these guys, on stage with a beer in their hand, are constantly getting side tracked telling hilarious “beer stories”…like the one about their trip to Prague (the Pilsner capital of the world) and Frank Heaps Chairman of the Board, having a bath in a tub full of beer. True story! Apparently it’s therapeutic. His only complaint was they didn’t give him a straw.

On the business side of things, Steam Whistle has now swallowed up a full 1% share of the Canadian beer market. Doesn’t sound like much? I’ll remind you that this market share number is a result of pure organic (and powerful) sales growth.  There have been no mergers, acquisitions or takeovers of smaller competitors to grow their business – unlike the big 3 beer oligarchs in Canada – which I will also remind you are not Canadian – contrary to their branding and advertising.

As an investor I am pleased to say their results are fabulous – I can’t tell you the numbers because they are still a private company – but suffice to say they once again achieved  growth in sales, net income and EBITDA. They also declared a nice dividend again this year.   Thanks, guys.

There were questions from the floor on US expansion plans. Cam said there are no plans in place of a US invasion. There are still places in Canada that have not been blessed with Steam Whistle distribution that they need to work on.

The next big phase of the company will be expanding their brewing and warehousing capacity. Their growth requires it!

Man, have they come a long way. Steam Whistle Brewing was launched in March of 2000 and that summer I visited Greg at The Roundhouse.  He proudly showed me around the facilities and when we stopped in “the cooler” there was only one skid of beer on the floor! It was July! – And there was no beer on the floor? I thought OMG what did I do.

Patience as a Private Equity investor, and their vision, hard work and passion has created a textbook Canadian success story.

Speaking of textbooks, I honestly think the Steam Whistle story and business model will end up in a business text book one day.

Visit http://steamwhistle.ca for a full taste of what they are about!

Skip back to main navigation

0 comments on “DO ONE THING REALLY, REALLY WELL!”